A little bit of welly history!

A Little Bit of Welly History

Did you know wellies were originally worn by officers in the British Army, and have been around since the 1790s!  However, it was the first Duke of Wellington, Arthur Wellesley in 1817 who popularised the shoe.

As the story goes, Wellington, who was a leading military figure in Britain in the 1800s, asked his shoemaker to modify his riding boots. The result was a form-fitting, tassel-free boot that was comfortable for riding yet stylish enough for social settings. Wellington’s fame (led others, especially British aristocracy, to start wearing this new style of boot, too. And because the boots were his personal creation, the name “Wellingtons” stuck.

Wellington’s boots were made of leather, but in 1856, the Scotland-based North British Rubber Company (known today by the brand name Hunter Boots) began manufacturing rubber Wellington rain boots. Rubber enhanced the boots’ design by giving them more flexible movement and making them 100% waterproof.

Wellingtons gained public popularity in Britain and across the globe in the years following World War I and World War II. During both wars, the North British Rubber Company was commissioned to produce rain boots for soldiers in an effort to prevent “trench foot”—a medical condition caused when feet are exposed to wetness for long periods of time. When the wars were over and soldiers brought the boots home, farmers, gardeners, and those working and playing in harsh weather conditions prized the footwear for its ability to keep feet warm and dry from rain, snow, and mud.

Wellingtons were originally only available in one colour: black! Other colours didn’t appear until 1956, the year Hunter Boots introduced green boots. Today, a virtual rainbow of colours, patterns and styles exists.

Our own branded Dedito wellies are manufactured in Europe and made from 100% natural rubber. Tailored at the ankle to create a slimmer fit ideal for both men and women, our Dedito wellies have a full 4mm neoprene lining including the foot bed, to keep you dry and warm and are available in Khaki Green or Brown, in sizes 4 to 13.  You can find out more about our own brand wellies here. 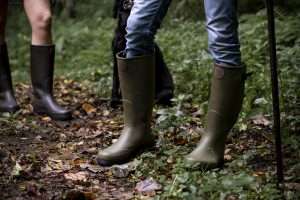