It has been a very sad few weeks here at Dedito HQ, as we have had to say a heart-breaking and somewhat unexpected goodbye to one very special Dedito team member, Figlio Haakan di Dedito, affectionately known by all who loved him as Filli. 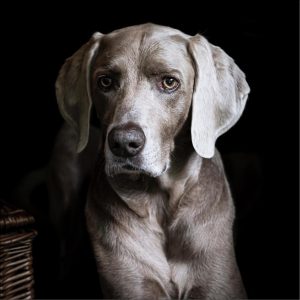 One of a litter of nine pups born in May 2011, Filli’s father was Dodi, Dario’s first Weimaraner and the original inspiration for the Dedito brand.  His mother Reha, who was carefully matched with Dodi, was a true ‘Essex Girl’, owned by Dave Pilkington, a well-respected breeder and all-round font of Weimaraner information.

Not only was Filli a handsome dog, with an incredibly sweet nature (except when you wanted his seat on the sofa!), he was a pleasure to train; always attentive and listening to instructions and continually top of the class.

Filli competed in numerous trials in Holland, passing them all easily and was also graded multiple times in trials here in the UK.  Despite all his trialling success, working and running on the grouse moors was where he came alive and where he was truly at home.  Luckily, living in North Yorkshire, he was surrounded by some of the best grouse moors in the country, where he could do what he did best……hunt, point and retrieve.

Before moving to North Yorkshire, Dario lived near the coast in Holland and it was here that Filli was lucky enough to spend a great deal of time at the beach, his favourite playground and he loved nothing more than rolling around in the sand and swimming in the sea.

Over the years Filli made many friends, but one stood out in particular; probably because he was a green stuffed toy vegetable…..Mr Broccoli!  While in Holland several years ago, Filli accompanied Dario to a meeting at an IKEA office, where he was such a hit with the IKEA team, they allowed him to choose a soft toy from their latest range.  He went straight to Mr Broccoli and from that point on the two of them were inseparable.

The loss of Filli has left a huge hole in Dario’s’ heart, but he will also be missed terribly by the Dedito team and all those who came along to the Dedito stand at game fairs especially to say hello to him.

Although he is no longer with us in body, his memory will live on; not only in his son Luca who is also an important part of the Dedito team, but in a new boot model, the Haakan (taken from Filli’s registered name and meaning ‘chosen son’), which will be joining the Dedito family later this year.

“God looked around his garden-And found an empty space

He then looked down upon earth-And saw your tired face

He put his arms around you-And lifted you to rest

Gods garden must be beautiful-He always takes the best

He knew that you would never-Get well on earth again

So he closed your weary eyelids-And whispered, “Peace be thine” 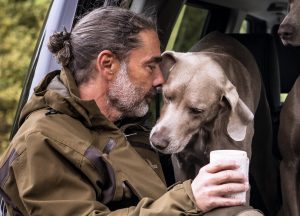