Ask a random group of people what scares them and its pretty much certain spiders will get a mention more than once.  However, there is another eight-legged creature living widespread across the UK that has the potential to cause problems both for us and our pets – the tick!

There are over 20 species of tick in the UK, but the most common are the sheep, fox and hedgehog tick – but don’t be fooled by their names.  Sheep ticks don’t just attach themselves to sheep!  These blood sucking critters have the potential to spread disease in both humans and our pets, resulting in serious, debilitating illness.

Most commonly found in woodland and grassland, there have traditionally been two main seasons for ticks in the UK, with numbers increasing in March, peaking in late spring and summer and remaining active until October.  As our climate is gradually warming, it is likely we will now start to see them all year round.

The female tick will lay around 3000 eggs at a time, which hatch into larvae that climb to the tops of vegetation to ‘quest’ for a host.  They can sense not only the carbon dioxide humans and mammals breath out, but also the vibrations we make and our body heat.  They can’t jump or fly, but as we or our pets brush past undergrowth, they will climb onboard with the aim of finding somewhere to feed.

The danger from tick bites is their potential to transmit disease in their saliva.  Not all ticks are infected but there is no way to tell if they are or not.  So, preventing the tick bites in the first place is key.

The main infection that can result from a tick bite is Lyme disease; treatable with antibiotics if diagnosed early, but if left untreated, Lyme disease can result in neurological problems and joint pain which can develop months or even years later.  If you or someone you know has been bitten by a tick, it’s vital to see a medical professional as soon as possible.  Alongside a bull’s-eye rash around the bite area, other noticeable signs of infection are flu like symptoms and fatigue.

Lyme disease can cause long-term debilitating illness in dogs as well, but it is more difficult to diagnose, so prevention against ticks is vitally important.  Symptoms in pets include: limping, stiffness and swollen joints that shift between legs, fever, low energy and swollen lymph nodes around the body.

Ticks can carry other nasty diseases that didn’t used to appear in the UK such as babesiosis and anaplasmosis, but as increasing number of pets now travel abroad or are being imported from other countries, it is likely these will start to increase.

A tick hook offers the best method of removal. This small device fits under the body of the tick and is used in a slight twisting motion to make sure both the head and legs of the tick are removed intact with the body. Apply antiseptic to the bite site. 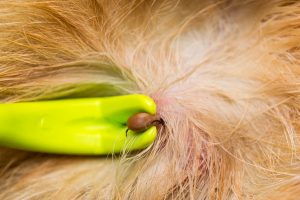 A tick should never just be pulled off, burnt or ‘suffocated’ using Vaseline or nail varnish etc, as this can aggravate the tick or lead to secondary infections.

If you can, keep the tick in a sealed jar. That way, if you or your pet develops an infection, you can take the tick, to the doctor or vet and they can test the tick for disease.

PREVENTION IS BETTER THAN CURE!

Always cover your skin while walking outdoors and tuck your trousers into your socks or boots.  Use insect repellent on your clothes and skin – products containing DEET are best. Try to stay on clear paths whenever possible and wear light-coloured clothing so ticks are easier to see and brush off.

Regularly checking your dogs’ pays dividends. Bear in mind that ‘unfed’ ticks are very small and far less noticeable than those which have been attached for a while with blood-swollen abdomens. The characteristic rash associated with Lyme disease and often seen around the site of a tick bite in people, is usually not seen in dogs.

There are several products, such as collars, tablets, and spot-on treatments, that are highly effective at killing ticks, and very importantly, they tend to work before the tick has been attached long enough to spread disease.

It’s especially important to make sure your pet is protected throughout the warmer months, particularly if you live in a high-risk area.

To find out if you live in a high-risk area visit: https://www.msd-animal-health-hub.co.uk/KBPH/pet-advice/parasites/map-of-tick-risk